Once you have selected your motherboard and processor, it is time to select the type of RAM that you will use in your system.  Today there are literally hundreds, if not thousands, of choices out there from multiple manufacturers all with different specs.  This can be overwhelming.  Thankfully, you have DesktopComputerNinja to help you out.

Today, we take a look at memory and what you need to keep in mind when selecting RAM for your new computer build so you can make the right decision and build a computer that will run flawlessly as you use it day in and day out.

Clear Up the Confusion

Many users who aren’t too tech savvy often get the term memory confused with something else that we will discuss next week that you need when you build a computer – the hard drive.  Basically, they mix up the terms memory and storage.  Actually, it is a pretty understandable mix up when you think about it.  After all, a hard drive stores your data so isn’t that kind of like memory?  Maybe in the human brain, but on a computer, your hard drive is the amount of storage you have.  Sort of like how much closet space you have.  While your memory is how much of that storage you can access at once.  Sort of like how much you can pick up that is sitting in your closet.

So What Is RAM?

RAM is an acronym for random access memory and is pronounced just like the vehicle that shares the same name. This is a type of computer memory that can be accessed randomly and is the most common type of memory found in computers, printers and a host of other types of devices.  RAM is much faster compared to traditional storage memory like that found on a hard drive, so your operating system uses it to store files for quick access so your computer runs much faster than if it just had to rely on the slower storage media present in your computer.

There are a few types of RAM out there for you to choose from, but the reality is your choices will be limited.  Much of the specialty memory out there is much faster than the traditional DDR-SDRAM you can almost anywhere, but it is far more expensive.  Also, most motherboards will only accept one type of memory, so the choice has been made for you.

In today’s desktop building world, you will most likely be choosing between DDR3 and DDR4 memory types.  DDR4 is the much faster option available and if our board supports it, I suggest you use it as it will improve your performance, but it will come at an increased cost.  This memory is perfect if you are building a high end machine that needs to play the latest games or edit video.  If you are building a basic office machine, you may be able to get away with DDR3 memory instead and save a little money while you’re at it.

How Much RAM Do You Need?

This is one of the most common questions people ask, and with good reason.  How much memory you choose will determine how well your system runs and what you can do.  Let’s first take a look at what the most recent versions of Windows require in order to run:

Now, just because they will run with these RAM amounts, doesn’t mean that you should run Windows with this amount of memory.  In fact, I would recommend doubling these figures in order to achieve a relatively smooth experience using Windows.

Now, that is just to run Windows.  We haven’t even talked about the other applications you plan on running.  Each application you run will load itself into your RAM memory and each application has its own memory requirements in order to run.  That doesn’t mean that if an app needs 1 GB of RAM you will need to add a full 1 GB of RAM on top of your base in order for it to run.  It isn’t that simple.

It all depends on what you are running.  If you are sticking with basic office applications most likely the 4 GB of RAM will be more than enough.  However, if you plan on gaming or running video editing or even very complex databases and spreadsheets, you will want to up your memory requirements for best performance in building a high-end gaming PC.  If you are creating a high end machine, I recommend a minimum of 8 GB for good performance.  You could even go as high as 16 GB if you want even better performance and you have the budget to do it.

Of course, you will hit a point where adding memory won’t really help you.  These days anything more than 16 GB won’t really give you a significant speed boost although you will be able to load more applications at once.  Like everything, it is all about balance.  Anything from 8 GB to 16 GB will handle almost anything you throw at it these days.  But remember, RAM needs grow each and every day so if you want to future proof your desktop to get the most life out of it possible you may want to consider adding even more.

One of the specs you will see on your RAM is the speed.  Every stick of RAM runs at a certain speed and that speed determines how fast apps can be loaded into it and how fast they can be accessed once they are loaded.  Now there are tons of different speeds for memory, but your motherboard will help you make that decision.  Your board will be rated for certain memory speeds.  When selecting memory for your new build, always select the fastest speeds that your motherboard supports when buying memory.  Just don’t go over or mix and match speeds of memory that you install. 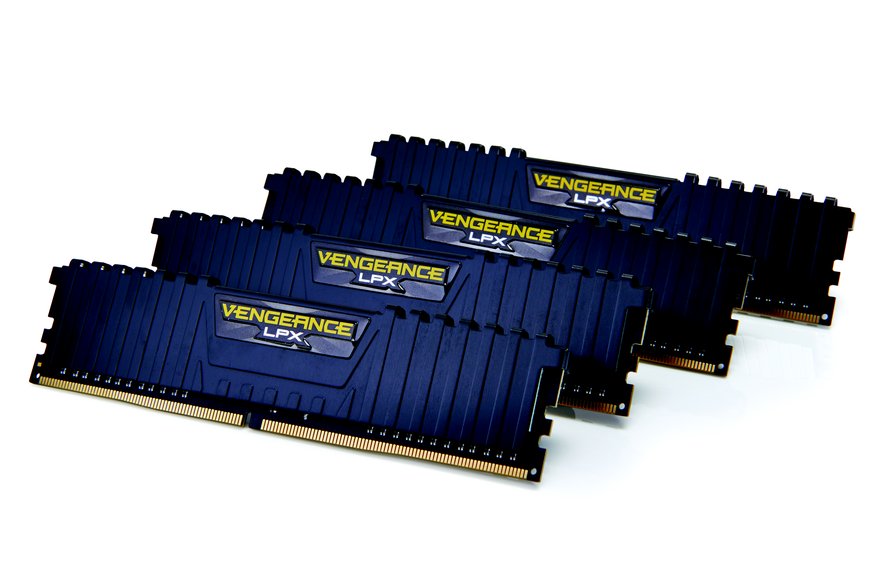 Some motherboards support or even require what is called dual channel DDR.  This means that instead of just one stick of memory, the board will use two sticks in order to provide faster speeds while in use.  This is a great way to get at least a small speed boost on your machine, but it means that you always have to buy not one, but two memory sticks.  If you want to upgrade later, you will have to add two sticks, not just one in order to maintain the parity.

What this means for you as a builder is you may have to spend more on memory that you originally wanted.  It also means that when you are ready to upgrade, you will need to not only choose the right type and speed, but you will also have to make sure you have room on your board for another full 2 sticks.  If you don’t, you will have to buy sticks with even more memory on them and that could raise your upgrade costs significantly.

In the end, it really comes down to your motherboard.  In fact, it actually takes a lot of the guess work away from you when it comes to choosing memory.  Each board on the market accepts only one or two types of memory and includes recommended speed settings for your memory.  If you want to make sure you build a stable PC, you are going to want to match those recommended specs with the memory you buy.

It will also tell you how much memory you can install on the board as well as if you will need to run two sticks in tandem with one another or if you can just buy one stick instead.  Every board is different, although in most cases today you will probably be buying DDR3 or DDR4 memory for your new machine.  If you are unsure what type to buy, just check out the specs of your motherboard and it will tell EXACTLY what you need to buy.

If you need help choosing a motherboard, check out our guide on selecting the right motherboard here.

In my experience, you are always better off if you buy memory that is completely identical right down to the manufacturer, especially if you are building a high end gaming rig or video editing behemoth.  If you don’t, you could see performance problems or even crashes.  Now, in theory, you should be able to install memory that is different and even slower than one another.  When this happens, the faster memory just slows down to match the slower stick.  However, in practice, this doesn’t seem to always work and can often cause stability issues.

If everything about a memory stick is identical, why does it matter if it has Corsair’s name on it or Crucial’s?  The truth is nobody knows.  In theory these two sticks should run together just fine.  But, anecdotally at least, they don’t always like sharing the same playgrounds.  While it is still a relative mystery, the rule of thumb that everyone uses today is always by memory made by the same manufacturer if you want the best results.

Of course, if after all that you are still having problems, you could be looking at something more serious such as an issue with your motherboard or even the power supply on your computer.  Those repairs are best left for discussion on another day.

Choosing the right memory isn’t something that should be taken lightly.  Your RAM is one of the most used components in your computer and is often at least partly responsible for how well your computer performs day in and day out.  That being said, it is one of the easiest things to choose, especially if you took your time selecting the right motherboard.  Still, you would be surprised how many times people mess this selection up.

To conclude, read your documentation carefully and buy good quality memory that matches and is compatible with your motherboard when building a new desktop PC.  If you do, you will be glad you did as you will have fewer issues when using your computer and your machine will actually be at least a little faster while you are using it.