When it comes to desktop graphics cards NVIDIA generally have the market locked down with their latest 10-series cards. However, AMD still release cards that offer good performance for lower prices. Their RX 400 series cards are a hit with those who are after a decent cards that won’t break the bank. This week they released their new RX 500 series cards and while they are still super well priced, AMD has not really done much when it comes to their performance.

The first two RX 500 cards that have been released are the RX 570 and the RX 580 graphics cards. Now as mentioned, AMD have not really made any big changes to these cards from the RX 470 and the RX 480. The Polaris 10 GPU has seen a slight revision, the cards clockspeeds have been turned up and a new memory state has been used to offer a slightly more powerful card for a similar price. 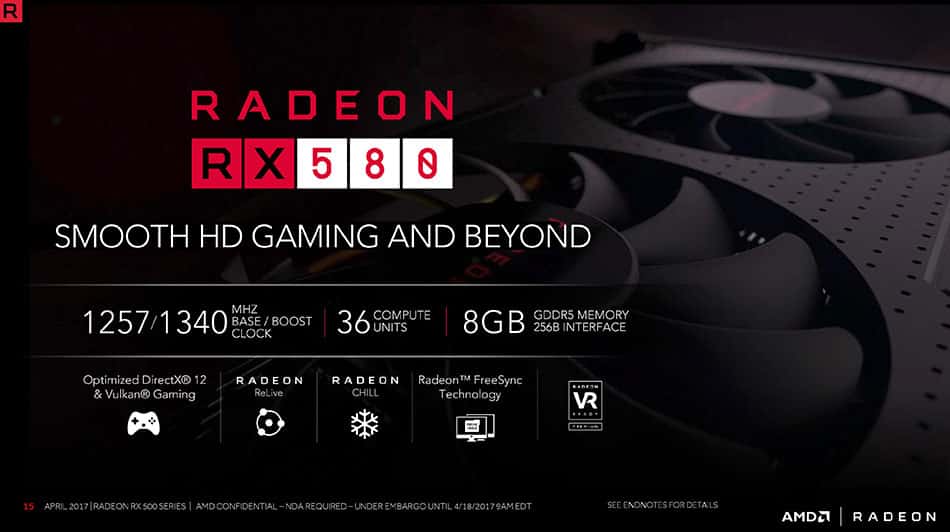 The configurations also remain the same, however the TBPs (Typical Board Powers) have gone up for both the new cards. The RX 570 now requires 150W and the RX 580 now requires 185W. While this might not be a huge increase over the RX 470 and the RX 480, it must be noted that these are more targeted at entry level setups and some users are still running lower wattage power supplies. While some prebuilt gaming setups have 450w or higher power supplies I have noticed that the cheaper ones struggle to offer or maintain the correct wattage and I would seriously consider purchasing a good power supply unit to avoid any issues with your new card. Luckily there are a host of great affordable options online and I personally recommend the EVGA 600W Bronze PSU for its price to performance ratio and for its 3 year warranty.

While these two cards will hardly take on the might of NVIDIA’s 10-series cards, they do offer gamers with a tighter budget great performance for great prices. Currently the launch prices of the cards are as follows, the RX 570 will set you back a cool $169, while the slightly more powerful RX 580 will cost you $229. If you are looking at diving into the world of gaming, then head over to our top cheap gaming desktop PC guide where you might find exactly what you are looking for while still leaving you enough of your budget to consider the new RX 570 or the RX 580.